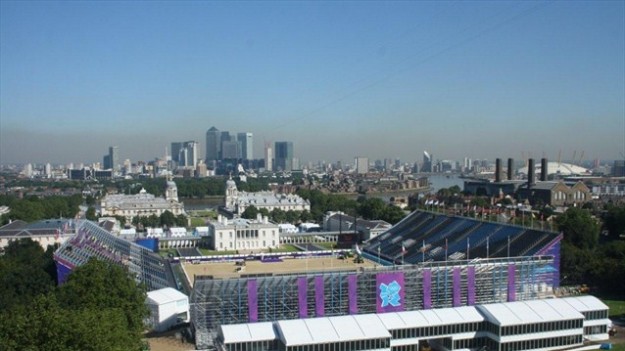 This by Dan Jackson, M.B.A. '12, is adapted from our blog, Real Estate Matters.

The marathon is a popular Olympic sport.  The official distance of the marathon is 26.2 miles or 26 miles, 385 yards.  Have you ever wondered why this particular distance?  Olympic Fun Facts  explains, “It was decided at the 1908 Olympic Games in London that the royal family needed a better view of the finish line, so Olympic organizers added an extra 385 yards (0.2 miles) so the finish line would be right in front of the royal box.”

Every four years, several hundred million people across the world tune in to the Summer Olympic Games to check out their favorite athletes and to show support and solidarity for their country.  A little over 100 years later, London has just completed its third time as the host city for this world event.

While many spectators enjoy the great athleticism and sportsmanship that takes place during the Olympic Games, it can be easy to overlook the economic and real estate development that the Olympic Games can provide for the host city.  A study by Locate in Kent, found there is much evidence that Olympic Games have an immediate short-term impact on the host city and region in terms of local investment and regeneration. Benefits arise from the level of economic activity around staging the Games, to upgrade sporting, entertainment and general urban infrastructure. This also can lead to additional permanent employment after the games and may lead to longer-term impacts.  I’d like to provide a brief snapshot of the real estate development that was part of the preparation for the 2012 London Olympics Games.

The Olympic Delivery Authority (ODA) was formed in 2006 to help the city prepare for the 2012 London Summer Olympics.  ODA has been the primary group responsible for overseeing the building of the Olympic venues and the overall infrastructure surrounding the 2012 Games.  The planning and implementation phases of the timeline began in 2007.  Each year, ODA met diligently to accomplish various deadlines and because of this, they were able to finish the entire project nearly a year in advance.

The Olympic Delivery Authority determined that for the 2012 London Olympics, they would use existing infrastructure in and around London for many of the sports venues, but would also build many new facilities as well.  Some of these new structures would be permanent and would remain in the area after the Games were complete, helping to create a new economic area of vitality.  Other structures would be temporary and would be torn down to make way for a larger green space that would help to connect and promote flow between each of the individual spaces within the site.

In a typical Olympic year, there will always be a variety of real estate development that goes in and around the host city but the primary area of development, and the area that receives the most attention is the Olympic Park.  The Olympic Park is considered to be the center stage of the games for both athletes and spectators.

Development for the 2012 Olympic Games

Listed below are venues that have been developed for the 2012 London Games.  These structures will help to transform the area in and around Olympic Park.  Many of these venues will remain a part of the area after the games have completed, while others are only scheduled to be utilized during the Olympics, and will then be taken down afterwards.  Below, you can learn more about each of the new and spectacular developments at London’s Olympic Park.  There are lots more venues that will take place all around the United Kingdom, but the focus for this post will be on development around the heart of the action – Olympic Park.

Click below on any one of the links to find out more about the Olympic Park venues that were constructed in London for the 2012 Summer Games.

Situated within Olympic Park and very close to Olympic Stadium, the Olympic Village will host 16,000 athletes and officials during the Games.  The village will provide a space for athletes to prep for their sport or relax after their competition has completed.

The entire cost of the Olympic Village is about $1.73 million and is divided into three specific zones, Countryside, Seaside and Heritage zones.  The International Business Times reports, “The 2,818 apartments are light, functional and airy, with wi-fi, beanbags and television. There are no kitchens, which will be installed after the Games. The 24-hour dining area has 5,000 seats in an area big enough to park 880 double-decker buses.”  By the end of the Games, the dining area in the Olympic Village will have served an estimated 1.2 million meals and munched through 25,000 loaves of bread, 75,000 liters of milk and 2.7 million bananas.  After kitchens are installed into the individual units, it is the anticipation that these units will help to create a new East Village community.

Aside from the physical brick and mortar structures that are being built for the Games, London has also focused on providing greater public transportation access into and out of Olympic Park for athletes and spectators.  Many upgrades, improvements and extensions were made to the rail services to make commuting around the city easy, both during and after the games.  Listed below are a few developments that relate to transportation infrastructure for the London Games.

Serving as a regional hub, this station is expected to reach upwards of 80,000 passengers during peak hours by 2016.  In preparation for the London 2012 games, the station received many upgrades including, new staircases, platforms that have been widened and lengthened and new elevators

A light rail line that has been in operation since 1987, most of the work that has been completed has been with the extension of platforms.  In addition 55 new rail cars were added to allow for three-car trains along the railway, which will benefit the abundant amount of passengers who are trying to make their way to the many sporting events at Olympic Park.

The line opened in 2010, but will play a key role during the Olympic Games as it connects the East End of London (where the games will take place) to other areas around London.  It will connect to the London Overground rail service and is the biggest piece of infrastructure developed in a long time.

For more information about transportation related infrastructure, check out Connections, a publication produced by the Olympic Delivery Authority.

The London Olympics will take place in East London, in a geographic area known as the East End.  Historically the area has been known for high levels of poverty, immigration and gangsters.  The hope is that the London Olympics will bring a much needed revival to this section of London.  The addition of the new sporting facilities as well as upgrades to transportation infrastructure will make this a very desirable area to frequent well after the Games have finished.  With the addition of new housing, more green space and increased transportation into the area, it is possible that the East End will become a destination hot spot in the city of London.

What do you think?  Have you travelled to London?  Have you visited the East End?  How do you think the 2012 London Games will change the landscape of the city? What do you enjoy most about the Olympic Games?  Share your experiences and stories.