This story is featured in the summer 2021 issue of St. Thomas Lawyer.

By keeping its mission, vision and values front and center, the law school has received honors and accolades over its 20-year history as it continues to grow and evolve. The mission of “integrating faith and reason in the search for truth through a focus on morality and social justice” is woven into every aspect of the school, including mentorship, culture, commitment to service and scholarship. It remains as relevant today as it did two decades ago.

As a founding member of the school’s Board of Governors, John Carr ’72, director of the Initiative on Catholic Social Thought and Public Life at Georgetown University, said the law school is blessed with a community that brings the mission to life.

“The law school and its leadership have been persistent and consistent in advancing its critical mission, building a culture of community, pursuing excellence and serving students during times of financial stress, changes in the legal environment and during the global pandemic,” Carr said.

When talk started in the ’90s about reestablishing a St. Thomas law school (the first iteration was launched in 1923 but lasted only a decade due to the devastating effects of the Great Depression), a feasibility study was performed. It was discovered that a new school would need to be unique to appeal to those in the Twin Cities and beyond. What would make the school different? A mission melding the professional nature of law education with the faith-based values of a Catholic university.

At the time of the school’s founding, Carr was a leader on Catholic social teaching for the U.S. Bishops’ conference. He remembers the first Board of Governors meeting as “surreal.”

“There was a vision, an initial plan and a lot of hopes, expectations, challenges and obstacles,” Carr recalled. “But the leadership of the university and new law school moved quickly, and this idea and mission began to take shape and actually happen.”

The law school received several hundred applications for its inaugural academic year, coming from at least 30 states and a dozen countries. When 120 students showed up to Terrence Murphy Hall on the Minneapolis campus in 2001, Thomas Berg, James L. Oberstar Professor of Law and Public Policy, said it proved there was demand for a school with a faith-based mission and a focus on social justice.

“Many students are drawn to the mission,” said Berg, a School of Law founding faculty member. “That wouldn’t be the case if the mission were narrow and sectarian. Virtually everyone who was part of the founding faculty had tenure at well-established law schools ranging from Notre Dame to Missouri. They came for the exciting prospect of developing a mission-based school.”

In 2003, the law school moved across the street to its newly constructed home on 11th Street and Harmon Place that included the light-filled Schulze Grand Atrium, Frey Moot Courtroom and the Chapel of St. Thomas More. Two decades after its opening, more than 2,000 students have graduated with law degrees.

“I’ve been a part of a number of boards and been involved in a few institutional start-ups, but my very small part in watching this law school grow from a promising idea to a 20-year-old thriving community of faith and learning, justice and law is one of the best things I have ever been close to,” Carr said.

Sarah Brenes ’08 J.D. was drawn to the law school because of its reputation of holistic lawyering and its commitment to social justice.

“The law school and its leadership have been persistent and consistent in advancing its critical mission, building a culture of community, pursuing excellence and serving students during times of financial stress, changes in the legal environment and during the global pandemic.” – John Carr ’72

As a student, she took part in the elder law clinic and later was a legal fellow at the immigration clinic. Brenes, who now serves as the director of the Refugee and Immigrant Program at the Advocates for Human Rights, said her professors were as vested in the education of students as they were in their own research ambitions. “Now that I’m more than 10 years out, seeing how the law school has grown, continued to thrive and remained committed to its mission, is reassuring for the future of the profession – to know St. Thomas is still attracting attorneys who are committed to working for the common good,” Brenes said. “It’s exciting to see the work alumni are doing and where their leadership is within the community. That’s something that should make us proud.”

Each year brings a fresh group of students who add new energy to the school, Berg said. It’s “exciting” to see the work they’re doing.

“We have students working in Catholic settings, students working for equality and justice and there’s a wide range of people doing important work across different forms of social justice,” he said.

The law school’s dean, Rob Vischer, said to attract top students, the school must have a strong value proposition. This includes a buildingwide focus on meaningful employment for our graduates, encouraging strong faculty-student relationships, the much-heralded mentorship program, and innovative learning opportunities, including the Interprofessional Center’s 14 legal clinics.

Vischer said creating a strong community has always been a St. Thomas hallmark, but it has been challenging during the pandemic. However, through creative ways of thinking, those relationships have continued to be built. Staff and faculty have reached out to each law student to check in and see if they needed help. The community continues to form bonds outside of the classroom at social gatherings via Zoom and through a limited number of in-person events.

“What is most encouraging to me about where we are as a law school, are the students that we continue to attract,” Vischer said. “They are fundamentally good, motivated, other-centered people.”

Since she was a young girl growing up in Texas, Yastril Nañez has wanted to be a lawyer. A 2017 undergraduate of the University of St. Thomas and a rising 3L, Nañez was attracted to the law school because of its willingness to listen to students and do things differently. “Access to the law hasn’t always been available to everybody, and I think that as a society we are constantly evolving and changing. We’re questioning: What is the law? What should be the law? Should we change the law?” Nañez said. “Because St. Thomas is newer, it’s able to foster that kind of environment.”

Nañez appreciates that professors and staff are invested in academic outcomes and students’ well-being. “That’s part of what makes St. Thomas distinct from other law schools,” she said.

At St. Thomas, Nañez doesn’t feel like she’s just a number. “For them to know all of our names, that creates a completely different relationship in the classroom.”

Visiting Professor Rachel Paulose said the faith-anchoring values of the law school are compelling to her as both a person of faith and a woman of color. She doesn’t take the job of training future attorneys and upholding the school’s mission lightly.

“To be able to impact students, so many of whom really do care about justice, and to expose them to not just the evil in the world, but to try to give them tools for overcoming that evil, has been incredibly impactful to me,” Paulose said.

The importance of scholarship

University of St. Thomas President Julie Sullivan said she’s proud of the law school faculty, who are ranked in the top 25 in the nation for their scholarly impact and have published in top law journals and major academic books. Their expertise has been sought after by media outlets across the globe.

“Through their scholarship and work in our clinics, they are contributing to a more just world,” Sullivan said. “And they are involving our students in this work, which is rooted in the principles of human dignity, such as more equitable sentencing and clemency policies or police accountability and reform. This is so important in strengthening our law school graduates’ commitment to continuing the work of building a more just world throughout their careers.”

Vischer said the scholarship the law school is doing in collaboration with students affects those at the school and beyond.

“We are already building a distinctive legacy in certain areas, such as criminal justice reform and religious liberty, and the overall scholarly culture contributes to the lifetime success of our students by deepening their understanding of the legal system” he said. “We are undisputedly the leader in professional formation among law schools in terms of trying to innovate curricular and cocurricular supports for students to grow holistically as professionals. We need to keep on that path and develop it further.

“Our ability over the last 20 years to become even more deeply a student-centered institution while maintaining our scholarly culture that has impact far beyond our walls – that is unusual,” Vischer continued. “Often that’s viewed as a choice. You can either be a student-centered place, or a serious scholarly place, and we’re doing both. We see that as part of our collective calling as a Catholic law school – our commitment to advancing truth in ways that advance the common good. That’s a nonnegotiable part of who we are.”

As a student, Nañez said she’s proud to see her professors and their scholarship in the spotlight.

“Our professors are an extension of the school and the institution itself,” Nañez said. “The fact that they are living the mission and putting action toward their words and thoughts, and St. Thomas is not only supporting that but encouraging it and allowing each professor to be an expert in their own field – that’s inspiring.” 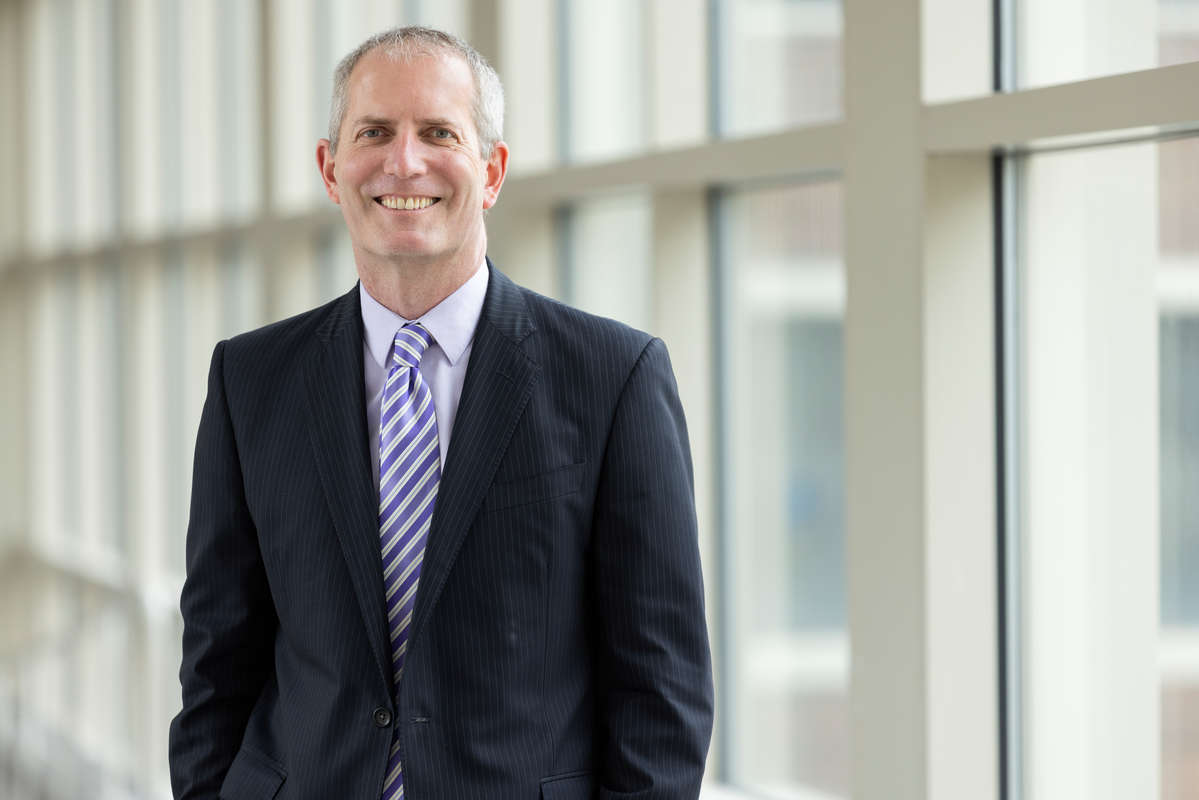 Vischer said the school, because it is mission-focused, isn’t interested in chasing prestige. “The investment is in the impact on the lives of students and the lives we touch through research, advocacy and collaborations,” he said.

An ever-growing number of law school alumni are finding their way into impactful careers. Whether it’s as a judge, elected official, law firm leader or nonprofit director, these lawyers all have one thing in common – their journey included a stop at the law school.

“The impact that our alumni have, as they grow into positions of greater influence, is a huge inspiration,” Vischer said.

And, as Carr said, students and graduates are the measure of the mission.

“[St. Thomas Law] was a brave, untested idea 20 years ago,” he said. “It has become a respected, distinctive, mission-driven example of the best of legal education for a challenging future.”