What will 10 Midwest students take home from two weeks in the Valley?

The Schulze School of Entrepreneurship kicked off a new curriculum in January 2015: The Silicon Valley Immersion. For two weeks, 10 students lived in a huge Victorian house near Golden Gate Park and visited Bay Area leaders, including IDEO, Pivotal Labs, LinkedIn and Plantronics. This is a view of just two of their days, shot through the lens of Job Portraits, a Bay-area business that documents startup culture in the Bay Area.

[Read student blog posts from throughout their trip.]

We joined the Tommies for a day-long design thinking workshop facilitated by Nic Werner and Janice Fraser at Pivotal Labs in San Francisco. Pivotal is an agile software development consulting firm at the vanguard of design thinking and pair programming. The students started the day by joining Pivotal for breakfast and its 9:06 a.m. standup. In response to a student’s question about the standup’s precise start time, Nic explained, “We experimented with different start times; 9:05 was just too early and 9:10 was too late.”

As the workshop started, Janice explained that Nic would take the lead for the day even though she originally developed the curriculum (and presented it the previous week at the White House).

Nic Werner kicks off the workshop with a quick presentation.

Since the students started the week with an empathy exercise, interviewing people on the street to understand a problem they could help solve, they used the workshop to test some initial assumptions. Nic began by having everyone (including Alec and Nicole) write down 10 assumptions that threatened their budding “startup.”

Once they’d recorded their assumptions, the students were asked to choose the five that posed the biggest threats to their products and hold them high in their right hand. The others were passed to the person to their left, who was then told to tear them up.

Next, each team created a 2×2 grid on a wall in blue tape, labeling the vertical axis more risky to less risky, and the horizontal axis from more confidence to less confidence (that the assumption is true). Then each team member’s sticky notes were distributed among the four quadrants.

Finally, students were told to remove anything in the bottom two quadrants (less risky) and arrange the remaining assumptions in a vertical column from highest priority to lowest. For the rest of the workshop, teams worked only with their top assumption.

“We started with 120 ideas in the room. Now there are just four,” Janice pointed out.

Lucas Gaughan holds his culled assumptions above his head.

With their top assumption established, the teams set to work devising experiments to test it, including techniques such as data mining, smoke tests and A/B testing. Surveys were also an option, but Janice dismissed them as a last resort. “People are terrible at telling you what they will actually do,” she explained.

Finally the teams combined the best of each member’s experiments into tests with a set amount of time — two days, two weeks or two months. Then each team shared their plans while Nic and Janice provided feedback:

• If you’re planning to get sign-ups for a minimum viable product, give yourself a goal number. The simple act of guessing means you are more likely to be surprised, and more likely to pay attention to the results.

• In response to several groups planning a gamut of different experiment techniques: Pick just one to execute and learn from it before moving on to the next.

• When doing user interviews, avoid direct questions such as, “Would you like a feature that did X?” Instead, illicit information through storytelling. For example: “When was the last time you did X? What was good about it? What was hard?” 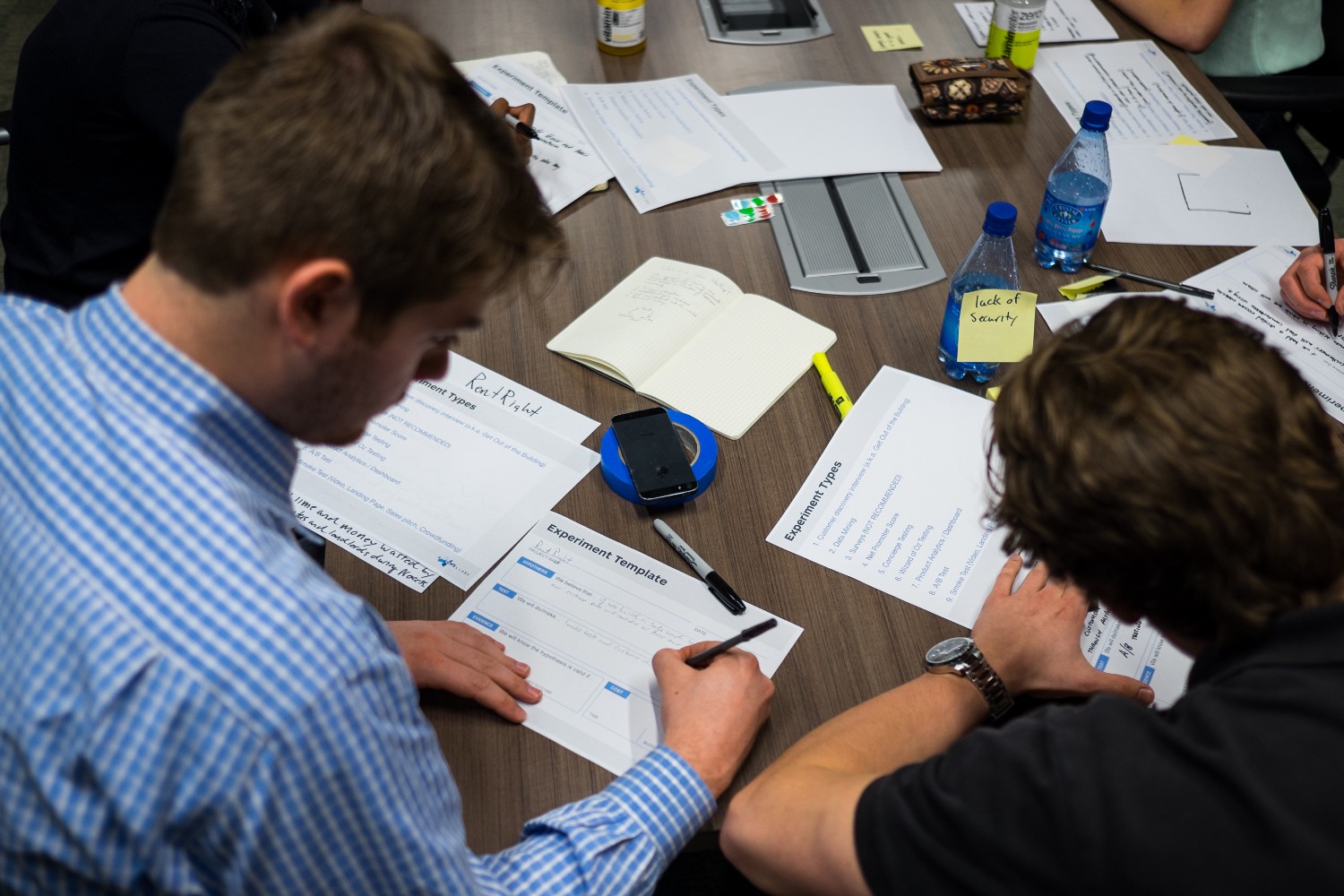 Teams work on their experiments. Students take advantage of the Ping Pong tables scattered around the Pivotal offices.

The day wrapped up with a “fishbowl,” where three students at a time were invited to answer the question, “What surprised you?” about the workshop.

“We thought we would keep working on the same problem and change how we solved it. Now I see we actually need to change the problem.” –Bobby

“There’s a lot to do before you build the actual product.” –Hannah

“Solving one problem can cause other problems.” –Lucas

“We got stuck and then were forced to come up with individual solutions. When we got back together, we weren’t stuck anymore.” –Mike 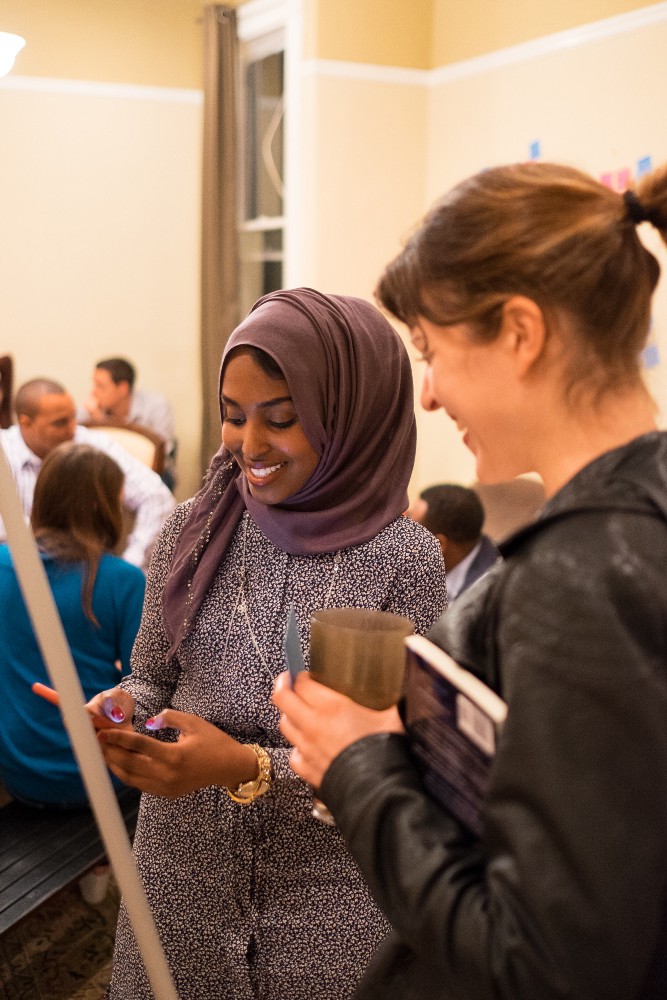 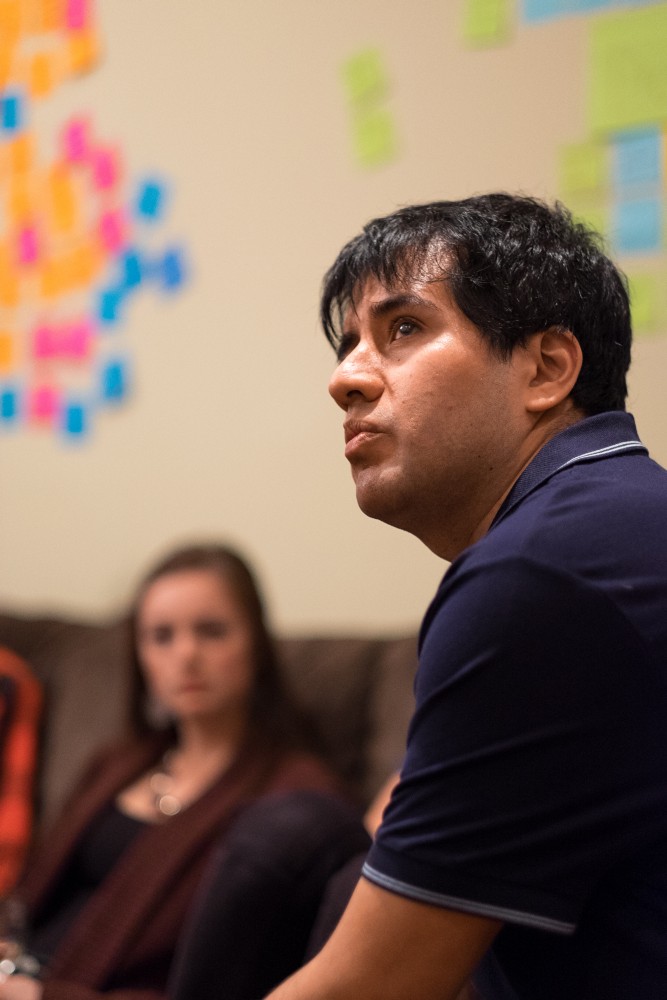 Belo Miguel Cipriani, a recruiting strategist and author of SF Chronicle’s “Get to Work” column. Kara Gamelin in front of sticky notes the students used to work through their empathy exercises.

To help clarify the nuances of Bay Area work culture, we hosted a discussion between three colleagues with recruiting ties (below). After hearing from our special guests and sharing a home-cooked dinner, the students brainstormed questions to ask during potential interviews.

Joining the students at dinner were Kamal Mohamed ’12, LJ Stead ’11 and Eric Ploeger ’11, who recently relocated this company, Juice Bot, to the Bay Area. After dinner, we asked the students to pitch themselves to a potential employer in three sentences (extra credit if it took the form of a haiku). “Why three sentences?” everyone wanted to know. Besides forcing clarity, brevity is the favored currency in Silicon Valley, we told them, where the elevator pitch is alive and well.

A trip to San Francisco wouldn’t be complete without pitching a potential investor. Ryan Kruizenga ’04, an alumnus of the Schulze School of Entrepreneurship and vice president at Mainsail Partners, graciously fielded pitches from the entrepreneurs-in-training, along with Mainsail associate Nicole Naidoo. Each team presented the problem they’d hit on in their first day of empathy interviews, as well as the business solution they’d been honing for the last two weeks. Each team presented the problem they’d hit on in their first day of empathy interviews, as well as the business solution they’d been honing for the last two weeks. Kruizenga and Naidoo followed up with questions and feedback. Click the tabs below to see each team’s concept and feedback. Course-planning software for colleges that helps students graduate on time.

A story-focused app to help create a support network for diabetics.

A content platform for “in the know” travel information.

Of course, the Bay Area is home to countless cultural treats beyond Silicon Valley, and students used their free time to explore many of them. We even introduced a few Tommies to our favorite Mission taqueria (below).

After two weeks immersed in Silicon Valley startups, we wondered if the students were interested in coming back to the Bay Area after graduation. A few said yes, definitely. Others were deterred by the high costs. “I can run my business anywhere, so I’m looking for a low cost of living,” explained Connor Koerbitz, who has a successful online retail business.

Most students, however, were eager to take what they’d learned back to the startup scene in Minnesota. “I would bring back the commitment to start small and fail early,” said Mike Schmitt. “In Minnesota, everyone is still trying to build everything perfectly.”

Kara Gamelin also pointed out that the Midwest fostered a different kind of entrepreneurship: “It’s more about viable businesses [instead of] something to change the world, or sexy products.” And the Midwest startup scene has it’s own benefits too. “It’s a smaller group of entrepreneurs, so people are eager to connect,” Connor said. “Learning doesn’t happen until you are challenged and stretched. You’ve been stretched here. I watched you go through a high, then feeling uncomfortable and lost, then finding your way to an ‘aha’ moment. You seldom get that in a single course. I’ve taught for 20 years and I’ve never witnessed such rapid maturing and growth in critical thinking and problem solving. I am thrilled about what I have witnessed.” –Alec Johnson