Every year since 1989, Skillings, a December 1985 graduate of the College of St. Thomas, has brought youth soccer teams from Colombia to the USA Cup. The international tournament, billed as one of the largest youth soccer tournaments in the world, is held each July at the National Sports Center in Blaine.

The tournament has grown from 69 teams in 1985 to more than 1,000 teams playing on 52 fields over the 600 acres of the venue. And Skillings, a New Ulm native, has played a large part in the tournament’s growth despite being based more than 2,000 miles away in South America.

As a student, Skillings first went to Colombia to study abroad for a semester. It was a circuitous way to return to Guatemala, the site of his previous study-abroad experience. His plans changed when he met Connie, a fellow student and native Colombian.

Skillings returned to Minnesota after the semester, graduated with a degree in international relations, and then ventured back to Colombia to teach English and to see where his relationship with Connie would go.

Skillings taught English for five years in Colombia before he quit to manage a new venture, PCT Colombia (Primavera Camping Tours), a business he started in 1989 to facilitate soccer team tours around the world.

“At first I was basically doing it as an extra thing,” Skilling recalls. “I wasn’t sure it was going to be a big business. I thought I was going to be teaching. But it started growing.”

As part of PCT Colombia, Skillings brought two teams to the USA Cup in 1989. “We’ve been to the USA Cup every year since. We’ve never missed a year,” he proudly reports.

Over the years, Skillings’ involvement at the cup has grown. He now brings as many as five teams – more than 60 players in all – to the tournament. There are also coaches and some parents who make the trek from Colombia.

Most of the players come from various private schools in Bogotá and Cali. “So actually, until they get here, a lot of them don’t know each other and they haven’t played with each other,” Skillings said. “They’re soccer players but they need to get to know each other and play a bit.”

That was true for Colegios Colombia, a team of 15-year-olds including Skillings’ son, Nico. After falling to White Bear Lake 1-0 in the preliminary round of group play, the team went on to record five straight victories en route to the “A” Playoff – Silver Flight championship.

Donilo Correa Oviedo, the team’s coach, has been to the USA Cup five times. He keeps returning “because it’s a very, very good experience. I love to meet people from other countries, to keep an excellent level (of play) in football.

“As a coach, I gain more experience in another system,” he added. “For example, in Colombia, I play the same system, the same tactics. But when you play with another form of football, you have to change your tactics and adapt your football to another condition.”

To play in the USA Cup costs each player about $1,800 plus airfare. The tour includes a week’s stay at St. Olaf College with morning practices and plenty of time to absorb some Minnesota culture during the off-time. USA Cup week is filled with games and offers many activities to all of the teams.

Diego Bolivar, an assistant director at PCT Colombia who has worked 16 years for Skillings, says the USA Cup “is the most spectacular tournament in the world” and features an opening ceremony that is “unforgettable.”

“I think 20 years after you participate in the USA Cup you never forget the experience,” he said. “It’s not just the trip, it’s the experience.”

Over the years, PCT Colombia has grown from those two teams competing in the USA Cup to more than 1,000 kids a year participating in various programs. The programs include trips to Minnesota, Wisconsin and Canada for Colombians, and trips to Colombia for Americans. Camps now also feature basketball and gymnastics, and Skillings is working on a volleyball program.

With all the work he’s doing to introduce Colombian athletes to the world (and vice-versa), Skillings has never had time to make it back to Guatemala. But he loves Colombia.

“It’s what you see – the vistas, the people. How they are. How they interact with you,” he said. “You never feel like they don’t want you to be there. [Colombians] are very welcoming and very happy that you’re there. There’s never any sense of anti-Americanism or anything like that. I’ve always felt like I’ve had friends.”

There’s also a palpable energy in the country. “They know they’ve had a tough time, and they just keep working hard to be a better county, a better people, a better place,” Skillings said.

“I’ve seen Colombia change so much in 20 years. It’s amazing to see the progress, and the attitude of the people, and to see a city that was real backward become really, really modern. You see those things every day. You see progress, and people who really want to see things get better. You see that kind of energy in people, and you just want to be a part of it.”

Skillings has been impressed by the USA Cup’s growth and quality of play over the last 21 years. He never grows tired of it; he’s always excited to return.

“And to have the kids come and see Minnesota and get to know Minnesota is an important thing to me,” he added. “I feel good about that.”

So does the USA Cup.

The age and the skills of the youngsters playing in the USA Cup may not be World Cup caliber, but the experience is. The Colombians will tell you that and so will their American guest players.

“It’s a fabulous experience,” remarked Nicolas Calderon, 15, a goalkeeper for the Colegios Colombia team. “I’ve never been to a big tournament before. It’s impressive.” But not without its challenges. As he pointed out, “the players are bigger here and more physical, taller and stronger.” As for Minnesota, “It’s nice, and the girls are very pretty!”

Valentina Rodriguez, 12, who plays on a boys’ team, echoed Calderon’s impressions of Minnesota. “Everybody is so relaxed. In Colombia there is so much noise, but here it is so relaxed,” she said. “The people are really, really good with us. They are treating us very good.”

Sara Blanco, 12, a teammate of Rodriguez’s, agreed: “We can talk with people. We meet a lot of other people. Very fun. I like it a lot.” She also enjoyed trading pins with other players in the tournament.

Dylan Peiffer, 15, a guest player from Hibbing, enjoyed the experience as much as the Colombians. “My goal is to play pro,” he said. “Once I found out Colombia called me, I was like, ‘There’s no possible way Colombia called me.’ I was so happy. I’ve been happy ever since.”

He should be. He scored the winning goal in the quarterfinal round of the “A” Playoff – Silver Flight against Colombia’s archrival, Ecuador. Two games later he and his Colombian teammates claimed the championship.

But playing with the Colombians was a challenge and a learning experience. “Being a guest player you get to know different teams and how they play their style of game,” Peiffer said. “Hibbing’s style of soccer is completely different from Colombia’s. Completely different. I had to adjust.”

Challenge, excitement, the proverbial thrill of victory (and sometimes the agony of defeat), sportsmanship, fair play and foreign cultures are all a part of the annual USA Cup. It’s all a lot of fun, too.

“I love this. I love this,” Peiffer concluded. “I’ve got to come back next year and hopefully be with Colombia again.” 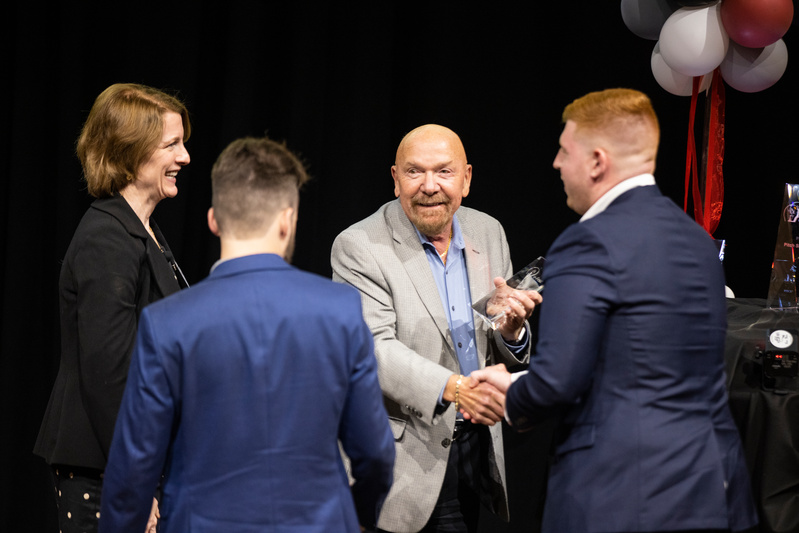