On these beautiful fall afternoons, I walk home from work past the volleyball sandpit. I really enjoy watching the students play a pickup game. They cheer, they groan, they chase the ball. When the ball comes toward me, I duck. Now and again I get bold and give it a kick back toward the pit. Clearly, I am no volleyball wizard. In fact, I’ve found one of the advantages of getting older is that nowadays no one demands that I spike the ball at the company picnic.

But I do like to watch our students play volleyball. They seem to have such a good time. On Friday night, I watched some real wizards play volleyball: the St. Thomas women’s team against the Macalester Scots.

I arrived early so I could watch them warm up. While the Scots were on the court, I watched the jumbotron (it doesn’t do to develop too much empathy for the opposition.) From the jumbotron bios, I picked out my favorites according to major. I liked Bri Peters, mechanical engineering, and Jana Christensen, neuroscience. As an economist, I’ve always had a soft spot for women in traditionally male fields. So, of course, my favorite player is now Kaitlynn Gathje, an econ major from St. Charles.

Then the Tommies, ranked No. 12 in NCAA Division III, took the court. Coach Thanh Pham, clearly a part of the team, sent shots toward assist artist Ashley Maher (below right), who set up Kelly Foley (below left) for the kill shot. The team showed its enthusiasm – and expertise – for the game even in warmups. We were sharp and ready. I thought to myself, “Who could beat them?”Well, clearly not the Scots; St. Thomas won in three straight games. 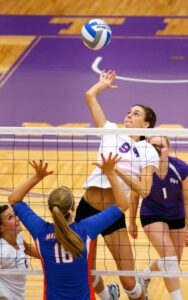 I was joined by other volleyball voyeurs in enjoying the win. We potatoes were off our couches, rooting for the home team and showing off our purple on the fancam.

When I walked home after the game, there still were students playing in the sandpit. While they weren’t the wizards of the varsity, I still enjoyed watching them and they still enjoyed their game. So, students, keep the pit clear of snow as long as you can.  Entertain me on my afternoon walk home. Wow us in the AARC.