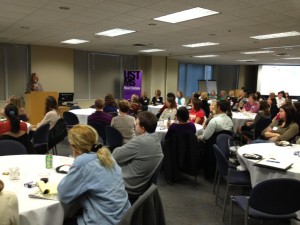 Every entrepreneur has their own story about the adventure they began when launching a new venture. Megan Tamte, co-founder and CEO of the Hot Mama retail chain shared her story with a full house of graduate business students and alumni at a recent Master's Pub event. Hot Mama is a chain of clothing boutiques catering to contemporary, fashion-loving moms. Tamte co-founded Hot Mama in 2004 with her husband, Mike.

The idea for Hot Mama was inspired by a stressful shopping experience Tamte had shortly after the birth of her first child. The stores were too crowded for strollers, the sales associates did not understand what she was looking for and the overall experience emphasized the fact that her ability to shop had changed forever once she became a mother.

Tamte realized that there was a market need for a store that catered to moms. With that realization, a significant amount of planning, the courage to give it a try and friends and family who supported the concept, the first Hot Mama store was opened in Edina. Today there are 30 stores in 11 states with plans to have 50 stores by 2015.

When asked about words of wisdom, Tamte shared the following tips:

Feeling scared is a good thing.
Going into a new venture without a significant amount of experience can be a very scary thing. Tamte admitted that she still cringes every November 10th, the anniversary of her first store launch. She went into this venture without any retail experience, loans that were personally guaranteed and a vision she believed in but wasn’t sure anyone else would. Even though she was scared, Tamte stated “fear has power to hold us back. Do something scary.” She learned a lot, wasn’t afraid to ask questions and gained confidence along the way.

Surround yourself with cheerleaders. Stay away from naysayers.
At the grand opening of Hot Mama, Tamte observed an obvious difference between these two groups. The naysayers would come in to the store and make comments like “good luck”, ask questions like “do you have any retail experience?” and make statements like “wouldn’t it be great if this actually worked out”. Steer clear of these types of people. They only will reduce confidence. On the other hand, there were people who bought flowers to congratulate, hosted parties in the store for their friends even if they didn’t really “need” anything, watched her kids when the store required long nights and even shows support with a financial investment. These are the types of people to keep around.

Inexperience is ok as long as you are willing to learn.
Tamte came from a background as a 3rd grade teacher and her husband Mike worked for a non-profilt. Neither had experience in retail. It worked because she became a student of the business. She tapped into the knowledge of others who are smarter. This even resulted in the hiring of their first buyer who came to the company with significant experience in fashion buying at Nordstrom.

Good things come for those who stay focused.
Don’t forget your initial vision. Hot Mama’s vision is to empower women, not just moms, to feel good about the way they look. Tamte learned from her mistake when reflecting on their addition of maternity clothing for a short period of time. Even though this seemed like a logical extension of the brand, it did not fit the vision. This addition of maternity clothes caused the company to lose focus on their main vision. Once Tamte realized this mistake, she made the tough decision to remove maternity from the store despite the fact it was profitable. It just didn’t fit with what she wanted to do.

Entrepreneurs, do you agree with Tamte’s list? What would you add?