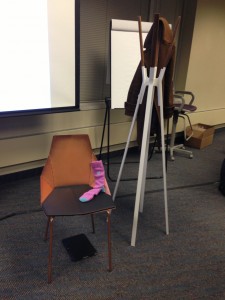 Last month the Opus College of Business hosted Medora Danz, vice president of Blu Dot brand at the Master's Pub. Danz shared some interesting insights on Blu Dot's history and mission. The company's goal is "to bring good design to as many people as possible." To them, that means "creating products that are useful, affordable, and desirable."

The modern design of Blu Dot in some ways combines the efficiency and economy of Ikea with the style and look of much more expensive brands. "B

lu Dot has created a brand that is humble, inclusive, democratic and humorous," said Danz, noting that the company is trying to go after the middle.

One particular story Danz told was of a marketing campaign in New York City, timed with the first anniversary of the opening of their first retail location there. Fast Company detailed the story in 2009:

Mono, an advertising firm based in Minneapolis, dropped off 25 Real Good Chairs, a $129 item designed and manufactured by Blu Dot. Whoever found the chairs was free to take them. The chairs were left outside the Apollo Theater on 125 Street (below), at the steps of the Metropolitan Museum of Art and atop the Highline, elevated park on the West Side, among other New York locations.

The recipients did not know that [a] video crew documented their snatch and get-away, sometimes trailing them for blocks.

Watch the video of the "Real Good Experiment" in the video above.

Participants at the Master's Pub had some great questions for Danz and, and were rewarded for them with official Blu Dot socks. Local residents - look out for their warehouse sale coming up sometime around June - they post details on the Blu Dot Twitter feed.