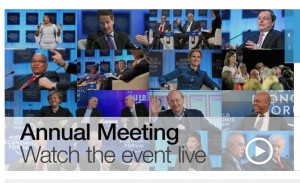 Christopher Michaelson, Ph.D., assistant professor of ethics and business law here at the University of St. Thomas Opus College of Business published an article about the World Economic Forum in Davos on the Huffington Post Tuesday.

As world leaders prepared for the World Economic Forum's annual fête in Davos, Switzerland in January, the event continued to embody what is arguably the most pressing irony of capitalism today. The problem of too much -- over-consumption, excessive rewards for an elite few -- flaunts alongside the problem of too little -- resource scarcity and extreme poverty for a less fortunate many. As politically and economically motivated uprisings sprouted around the world this past year, these problems also coexisted at Davos, one seeking to help solve the other while at the same time being blamed for being its primary cause.

More ironies abound in Davos. The program is replete with sessions on climate change mitigation, yet last year's "Greener Davos" still meant thousands of people flew to Zurich before busing another few hours to reduce carbon emissions, where executives' hired drivers waited to take upwards of 15 trips each day ushering their superiors from session to meal to social gathering. Every day, sometimes two or three times in a day, the same hotel hallways are gutted, rebuilt, and transformed, rebranded with disposable materials for yet another unique corporate host. Side discussions are distracted by outside-world incidents of the less powerful protesting against their leaders, yet the great majority of meeting delegates are elite, well-paid executives, academics, and politicians who, more than to solve problems, are there to make connections. One walks down the hallways and sidewalks overhearing the same dominant bits of conversations: "We are looking to acquire... ," "There's a lot of money to be made there... ," and "Well, there's got to be a business case... " When boasting of their corporate citizenship, executives peculiarly apologize for their compassion, preferring the lower common denominator of economic rationality: "We're not doing it to be good citizens; we're doing it for the money. That's the beauty of it."