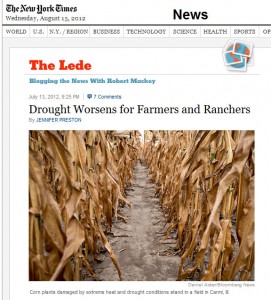 We had a refreshing rain shower pass through the Twin Cities yesterday, but I know the drought is affecting major swaths of the Midwest. "As corn crops wither and food prices rise, this has resulted in a steady string of visits to Iowa and other sun-baked states by politicians, including both Rep. Paul Ryan and President Obama," reported Andrew Revkin in the New York Times Dot Earth Blog.

But, interestingly, NPR's Planet Money noted that "In spite of the drought, many U.S. farmers will do just fine this year. They are, after all, covered by crop insurance — a program that costs U.S. taxpayers $7 billion a year." Yesterday's Planet Money Podcast looks into the business of farming and crop insurance.

Do you see crop insurance as a necessity or an unfair government subsidy of one business sector? Let us know in the comments.