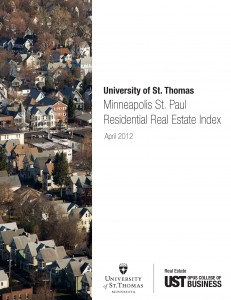 April’s active market for single-family homes priced under $14o,000 is one of several positive signs for the Twin Cities’ real estate market.

While it’s not a term often used to describe the housing market, a University of St. Thomas real estate professor observed that “the market for single-family homes priced under $140,000 has become quite active. They are flying off the shelves right now,” said Herb Tousley, director of real estate programs at the university.

The finding was one of several signs of a healthier housing market that were outlined in the UST Residential Real Estate Index, a monthly analysis of the 13-county Twin Cities area prepared by the Shenehon Center for Real Estate at St. Thomas’ Opus College of Business.

“The number of homes on the market in this price range has steadily been declining since the beginning of the year,” he said. “Although many of these homes are foreclosures and short sales, there are several types of buyers, including first-time homeowners and investors, who are purchasing these properties at a fast clip.”

Because of the active market, there is just a 3.1-month supply of the less-expensive properties compared to a 4.7-month supply for the market as a whole.

Here are other signs that point to the beginning of a healthier housing market in the Twin Cities:

And while April’s data is “one more step in the right direction,” Tousley cautioned that “median prices and sales volumes will have to continue to exceed the previous year’s levels for the balance of 2012 before we can say that the housing market truly is on the road to recovery.”

More details can be found on the Shenehon Center’s website: https://www.stthomas.edu/business/centers/shenehon/research/default.html.