There were days during the past 15 months that employees of Opus Northwest might have thought Harry McNeely Jr. was getting ready to join their construction crew on the site of the new business education building on Summit Avenue.

McNeely would arrive on the construction site, don a hard hat and saunter through the building, watching it go up piece by piece as workers poured concrete, ran wiring and pipes, installed drywall and laid carpeting.

"I was just curious what was going on," McNeely said. Even though signs banned everybody except construction workers from the premises, "nobody ever told me that I had to leave. So I would just sneak in and walk around."

McNeely need not have feared he would be kicked out of the building . . . not when the building is named McNeely Hall, thanks to a generous contribution he made nearly a decade ago in the hopes of providing a bigger and better home for undergraduate business faculty and students.

He proved to be not only a curious benefactor but a patient one, too. It took St. Thomas five years to receive city approval to redevelop the two-block site, including McNeely Hall on the southwest corner of Summit and Cleveland avenues, and another two years before the doors would open to the 75,000-square-foot building and 120-car underground parking garage.

Worth the wait? What does he think of the building?

McNeely just nodded in response to the first question and had a two-word response for the second: "It's terrific."

This is St. Thomas' second McNeely Hall. The first, immediately to the west, was named after his parents, Harry and Adelaide, in 1981 after St. Thomas purchased the building from William Mitchell College of Law. The old building will be called the Summit Avenue Classroom Building and will house the School of Social Work and several other programs until St. Thomas decides it's time for another new academic building on that site, likely next decade.

The McNeely name at St. Thomas goes back much further than 25 years. Harry McNeely Sr. graduated from St. Thomas in 1908 and worked for railroads in the Twin Cities area before establishing the St. Paul Terminal Warehouse Co. in 1916.

"Dad provided warehouse and distribution services for the Soo Line and its customers," using horses and wagons in the early years, the younger McNeely said. "We would unload the freight cars, store the product and move it to destinations around town."

McNeely, the youngest of four children, attended St. Paul Academy and Yale University, where he earned a degree in government and international relations in 1947. His first job was as an administrative assistant to the U.S. ambassador to Australia, working in Canberra. He found the job "a good fit" initially, but after two years "I decided I was not cut out to be a career government person - too much bureaucracy, too much fiddling between the bureaucrats and the doers."

He returned to the United States and went to work for his dad, who over three decades had expanded his St. Paul warehouse and transportation operations to Minneapolis, Roseville and New York. McNeely's first stop was New York, and after moving back to St. Paul he held several executive positions, including those in petroleum transportation and over-the-road trucking.

The McNeelys continued to expand their holdings in the 1960s and 1970s, building warehouses in the Midway area of St. Paul, St. Louis Park and Hopkins as well as in Kentucky and Ohio. They turned spent limestone mines into storage facilities in cities such as Kansas City and Quincy, Ill., finding the advantages of underground space irresistible.

As warehousing needs changed to favor single-story facilities, the McNeelys found different uses for older buildings. After being a tenant for 60 years in a six-story building constructed by the Soo Line northeast of downtown St. Paul, they purchased the structure in 1980 and renovated it as office space. Today the building is leased entirely by the Minnesota Department of Human Services. The McNeelys also renovated and manage three adjacent buildings occupied by state government agencies in what has become known as the Lafayette Office Park.

After their father died in 1968, McNeely and his older brother, Don, ran the businesses under a holding company called Space Center. The brothers eventually decided to split the company, and the younger McNeely's portion is known today as Meritex Enterprises, which has 300 employees and owns or manages about 10 million square feet of space. He still goes into the office every day as chairman emeritus, and the oldest of his six children, Harry III (Paddy), a 1981 St. Thomas alumnus, runs the company. (Paddy's son, Nick, is a 2005 alumnus.)

McNeely is humble, if not shy, in explaining why the company has been so successful over the last 90 years. "Everybody knows the reason in the real estate business: location, location, location," he said. "The other things that we've done well are to diversify and to be willing to sell long-held assets. When someone makes you an offer you can't refuse ... you don't!"

Walt Richey, who worked for Space Center and Meritex for 25 years and served as CEO before retiring in 1998, calls McNeely "a perfect boss" who "had good, intuitive judgment" and "a strong sense of business and personal ethics." In times of conflict, "Harry's approach always was, 'What's fair for both parties?' It was never about what was best for him."

Father John Malone, pastor of Assumption Catholic Church in St. Paul, has known McNeely since their families had farms in Lake Elmo. Malone worked on McNeely trucking docks as a seminarian and always has found him to be "an absolute man of his word. You never need a contract with Harry. A handshake will do." Malone also said McNeely takes philanthropy seriously and quietly makes contributions to many organizations.

As his active days at Meritex came to an end, McNeely took extra steps to ensure a smooth transition to a third generation. He and his children took a series of courses over several years at the University of Pennsylvania's Wharton School, and he was so enamored with the program that he helped to fund and launch the Institute for Family Business at St. Thomas.

"It has been a lot of fun," he said, "and it should be. If it's not fun, then don't do it. I feel sorry for those who carry on the family business because they feel it's their burden, their responsibility. That's the worst reason in the world. At that point, you sell."

McNeely never had to sell. Not that he's looking for another job, but a certain construction crew might be willing to take him on for its next building project at St. Thomas so he doesn't have to "sneak" around. Hard hat and all.

• Joined the board of trustees in 1969 and serves on the Academic Affairs, Audit-Finance, Board Affairs and Executive committees.
• Through the McNeely Foundation and personally, has helped to fund several initiatives at St. Thomas. These include a faculty development program that supported sabbaticals (1974), the start-up of graduate programs in business (1970s and 1980s) and the establishment of the Institute for Family Business (1990), which later evolved into the Center for Family Enterprise.
• Commissioned the statue of Monsignor Terrence J. Murphy, president of St. Thomas from 1966 to 1991. The statue, near the main entrance of new McNeely Hall, was the last work of renowned sculptor Paul Granlund and was finished after his death by Nick Legeros. Murphy never saw the sculpture but approved a miniature version shortly before his death. "There were tears in his eyes when we showed it to him," McNeely said. 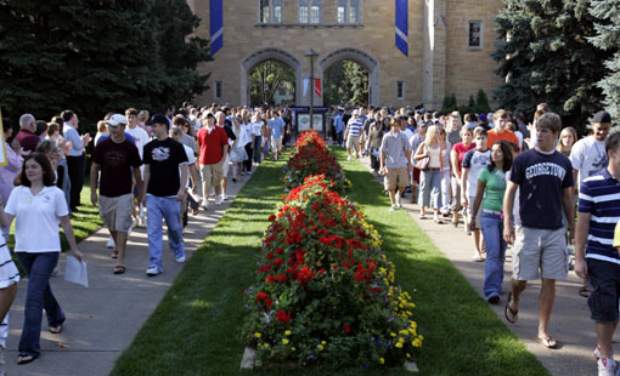