Monday began the 25th Session of the Human Rights Council in Geneva. The function of the session over the next four weeks is for both the Council and Member States to present their perspectives on particular human rights issues or the human rights records of particular States. The session began with the High-level Segment, featuring statements from government ministers,  heads of state from various countries, as well as UN Secretary General Ban Ki-moon. The first day also featured a lunch event sponsored by the Mission of Thailand, generously offering Thai food and drink to all, at which the Secretary General ceremoniously unveiled a beautiful photography exhibit on the occasion of World Wildlife Day.

After the high-level segment concludes tomorrow, the Council will look at specific issues and countries. This session will include reviews of reports from appointed Special Rapporteurs or independent experts on such topics as the freedom of religion, children in armed conflict, the right to food, torture, and more. Special attention will also be given to the human rights situations in North Korea, Syria, Central African Republic, and more. The Holy See, as a permanent observer, will be present throughout the session, as well as making its own interventions on some of the issues presented. It will be a very active few weeks! 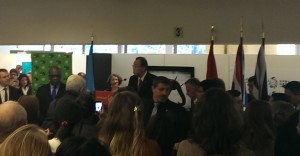 Joseph Grodahl Biever is a Murphy Institute Scholar working to support the Permanent Observer Mission of the Holy See at the United Nations in Geneva.