Bridget Nelson serves up awful, outdated movies with a side of laughs. (Photos by Mike Ekern '02)

Bridget Nelson ’87 remembers the dawn of her comedy career. It was nothing to laugh about. In fact, tears were shed.

Just months after graduating with a degree in communication and theater from St. Thomas, Nelson acknowledged to herself and her family that she simply wasn’t built for the desk job she’d landed as a buyer for Donaldson’s department store.

“I called my dad, crying, and told him, ‘I’m miserable. I think I want to be a stand-up comedian,’” she recalled.

Like most parents who have invested their hard-earned desk-job dollars on their child’s education, Nelson’s dad was lukewarm to her plans. (To be fair, her father actually was a nightclub owner who dabbled in stand-up comedy and once was mayor of Sauk Rapids, Minnesota.) Nelson followed her gut anyway, throwing herself into the local stand-up comedy scene, learning to write sketches through trial and error. Ever since, her life has been, more or less, a living monument to the adage that suggests you follow your bliss and let the rest fall into place.

Nelson is not only a stand-up comedy veteran but she also can count herself among the Peabody Award-winning writing team behind “Mystery Science Theater 3000,” a TV series that made “riffing” (witty commentary spoken at well-timed moments during a movie) famous. The Sci-Fi Channel’s cancellation of the show in 1999 did not stop Nelson from staying the course of her calling – bringing joy to people through comedy, ministry and performance.

The unbearable lightness of realizing you’re a comedian

Nelson’s self-revelation in her early 20s didn’t arise from the vacuum of outer space.

“I always knew deep down that I wanted to perform,” she said. Proof of her comedic inklings can be traced to a foretelling comment on her sixth-grade report card: “Bridget is scatterbrained but delightful and refreshing,” declared her teacher.

At St. Thomas, she unwittingly honed her stand-up comedy chops on her unsuspecting professors just by being herself. During one class she drummed up the moxie to toy with one of her journalism professors, longtime (now retired) Star Tribune reporter and columnist Dick Youngblood.

“One day he was telling us some newspaper-man smart-mouth reply that he said to someone in his typical crotchety manner, and for some reason I raised my hand and asked him, ‘Did you have to be such an [expletive]?’”

Immediately after, “there was that horrible silence every comedian loves and dreads before the joke lands,” she said. She held her breath as Youngblood’s eyes widened, the corners of his lips lifted and finally he broke the dreaded silence with a hearty laugh.

“It was a big deal to me because it was such an example of trusting your comedy instincts,” she said. “You think, ‘This is risky, but it just might work!’ Then the joke lands and the target laughs and you gain confidence.”

Developing her comedic instincts at St. Thomas, however loosely, may have helped instill in her the confidence she needed to follow her bliss, or at the very least stand beneath a spotlight telling jokes to a roomful of strangers. Through her early comedy acts she met many of the people who sparked the next big phase of her career at “Mystery Science Theater 3000” (MST3K).

A fellow comedian also new to the stand-up scene named Michael (Mike) J. Nelson would become her co-pilot not only in her career but also in life. While the club in which they met, That Comedy Place, no longer stands; Nelson and Mike do. The two married in 1989, and shortly after he was offered a writing position with MST3K, soon becoming the series’ head writer.

Nelson started as a “home writer” for MST3K, watching tapes of bad movies at home and writing jokes. In 1991, she signed on as an official member of the small, tightknit writers’ group – many of whom, such as Frank Conniff, Mary Jo Pehl and Kevin Murphy, she knew from her stand-up days.

For those unfamiliar with MST3K, the show’s deliciously wacky premise revolved around a character named “Joel” (played by MST3K’s founder, comedian Joel Hodgson), and later “Mike,” who is held captive on the Satellite of Love and forced to watch awful B movies by mad scientist Dr. Clayton Forrester, who is focused on discovering that one movie horrible enough to drive humans mad. Mike took Hodgson’s place as host in 1993.

The centerpiece of each episode was a horrendous 90-minute movie viewed by Joel, a janitor employed by the fictitious Gizmonic Institute, and “Tom Servo” (Murphy) and “Crow” (Trace Beaulieu and later Bill Corbett) – two of the four robots he built to keep him company. The trio appeared in silhouette – the show’s hallmark visual – as they roasted movies, scene after horrible scene, from their front-row seats.

Nelson made several eccentric cameo appearances as “Nuveena, Woman of the Future,” “Darlene” the space child, “Mr. B. Natural” and others.

Fast forward to 2017 and you’ll find Nelson, on a balmy March day, watching another bad movie ... and loving it.

After years of writing jokes for others, she began performing her own riffs with longtime MST3K friend Pehl for “Rifftrax” – an online service co-created by her husband and his friend David Martin that offers audio roasts of bad movies in the spirit of MST3K.

Mike, Murphy and Corbett perform most of the roasts. Nelson and Pehl, who joined “Rifftrax” in 2015 and riff together exclusively for now, contribute roughly one recording per month.

Today, she and Pehl are watching “Angels’ Revenge,” circa 1979, starring Jack Palance, Peter Lawford and seven genetically gifted female vigilantes on a small flat-screen TV in a tiny bedroom that’s been converted into a recording studio. All tracks are recorded at Murphy’s place, a cozy mid-century house nestled in Minneapolis’ western suburbia.

The movie is the kind of “campy, woman-y stuff” both women love to riff. The vigilantes, dressed improbably in matching low-cut white jumpsuits, huddle conspiratorially near a wooden fence, plotting their ambush on an outpost of bad guys. Their lines are stilted. Their lips are glossed. And their plan doesn’t make any sense. Luckily, Nelson and Pehl have the chops to make this 90-minute slog of scenes effervesce with new life.

Joining them in the studio is Murphy, who mans the recording controls while the women riff, sing and laugh their way through the film. The three are a veritable who’s who of MST3K history by the standards of any MSTie (the self-ascribed pet name of MST3K a aficionados). Pehl had a recurring main role as Pearl Forrester, the campy, diabolical mother of Dr. Clayton Forrester. Nelson riffs "Angel's Revenge" as Kevin Murphy runs the board.

Their humor, Nelson said, is more lighthearted than what they wrote for MST3K, and like the show, all the roasts are “PG,” though they sprinkle in a little “naughty, fraternity-type humor.”

For all the laughs and fun, both women take their performances seriously and strive to create their best work.

Riffing isn’t the only talent in Nelson's repertoire. One role close to her heart is talking about Jesus to church groups, large and small – a calling that came after some soul searching. Though she was raised in a devout Catholic family, and attended Mass every Sunday in the Chapel of St. Thomas Aquinas as a student, her Christian identity began to ebb once she achieved success.

It started to flow back in 1996, when she and her husband became “committed Christians,” she said. MST3K was in its seventh season and transitioning from Comedy Central to the Sci-Fi Channel. The show had been nominated twice for a Primetime Emmy Writing Award and a feature film, “Mystery Science Theater 3000: The Movie,” was released. By all appearances the Nelsons were living the good life.

“We had an ideal life,” Nelson said. “Two healthy sons, loving siblings, money to spend and we laughed our heads off every day surrounded by creative, funny people writing for an award-winning TV show.” Meanwhile “a profound emptiness” had begun to invade their marriage, she said.

What happened? “We realized our sinfulness,” she said. Then “one weekend, by some miracle, we began to pray together! We spent time confessing to God, going to church, and we began to study our Bibles daily. I also began to do a daily devotion study given to me years earlier by Jim Kellen, who worked in the [O’Shaughnessy-Frey] library.”

Nelson decided the time was right to do something new that blended her comedy and performance skills with ministry.

“Besides, how many puppet shows like MST3K are there to write in Minnesota?” Nelson joked.

She joined Bloomington, Minnesota-based Family Fest Ministries, a multi-denominational Christian ministry that partners with churches and families to provide camps, retreats and presentations for families, couples and youth. Nelson presented extensively, telling faith stories on various topics that she crafted from her personal stories. “Whether Bridget speaks to kids or adults, she simply draws in her audience, first with her amazing sense of humor, then with her heartfelt message,” said Pete Larson, executive director of Family Fest Ministries. “To listen to her talk about life, love and faith using her incredible sense of humor is a gift.”

Mike believes, “Bridget is better equipped to communicate the Gospel of Jesus Christ as it actually applies to human families, here, now, on earth, than almost anyone I know.”

Nelson discovered that “it’s important but also fun for young people to see that you can be a committed Christian and still be funny, or still be creative, or whatever it is, and you don’t always have to be so serious,” she said, emphasizing that she didn’t alter her jokes to be Christian themed after she recommitted to her faith.

In her talks, whether with adults, couples or teens, Nelson always brings up the need to confess sins, repent and be free.

“God gives you gifts, and they’re not contingent on you doing other things,” she said. “How you’re going to be a good steward of it or not is up to you.”

Riffing into the future

The sweet thing about shows such as this is what their fan bases lack in numbers they outdistance their chart-busting counterparts in devotion. Eighteen years after MST3K, Netflix revived the show with 14 new episodes in April. Though the Nelsons are not affiliated with it, they are supportive of the project, which was funded by more than $5.7 million by fans through Kickstarter – the most successful crowdfunded film or video project of all time.

Likewise, online discussion boards are brimming with stories from viewers of how MST3K got them through a tough time. Nelson is well aware of this, and believes the series’ unfailingly good-natured humor has a lot to do with the persistence of its fans’ devotion.

“In his book The Four Loves, C.S. Lewis said, ‘Friendship ... is born at the moment when one man says to another, “What? You, too? I thought that I was the only one.”’ MST3K had that effect on people,” she said. “Especially people suffering with loneliness and depression. I think people feel as if they are right in there with the writers, cracking up and ‘getting it’ in the way that friends do.” 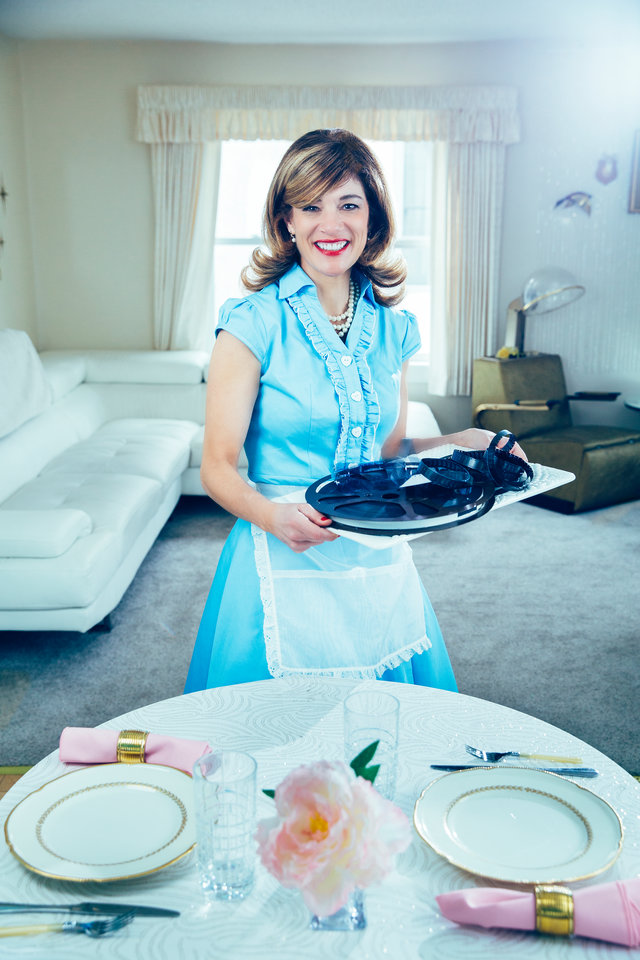 Nelson thinks it’s a distinguishing feature carried on through “Rifftrax” as well. She’s grateful to be back bringing joy into people’s lives through the comedic roasts that launched one of the great joys of her life. And she’s grateful to the people who have trusted and continue to trust her for a good laugh.

Then, like any good comedian, she closed on a light note.

“I’d also heard many stories of mothers saying, ‘Turn off that stupid show!’ To that I say, it’s a kid’s job to annoy their parent, and I’m proud to have helped out in a harmless way!”