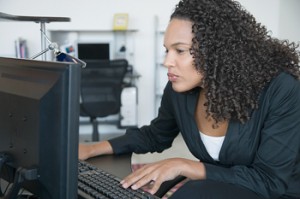 On average, how many hours do you spend sitting while in your office each day? If it is under six hours, you are doing better than most. According to a 2010 study by Ipsos, a France based research company, the average US employee sits for 6 hours per day in front of their computers and another hour per day in meetings.

Why does sitting too much matter?

A local company is helping researchers at the Mayo Clinic and University of Minnesota to understand the relationship between sitting at work and general well-being. Employees at Minneapolis based Caldrea have been participating in a study to learn more about the effects of sitting all day.

Caldrea employee and UST Alumna, Shelley Eckstein said, “I challenge myself to stand after lunch. Instead of getting tired after lunch, I keep my energy level up by standing.  I'm working my way up to standing 50% of the time. Although my muscles may ache a little now from the change, I've found myself able to stand longer each week and I definitely sit up straighter at my computer.”

Most of us can easily justify the $400 investment in a standing work station by simply calculating the savings on afternoon caffeine, not to mention the long term cost of health care expenses related to inactivity. By standing to re-energize, the savings from that $4 latte can be realized in less than six months.

Results of the Caldrea study will be available in August.  In the meantime, what do you think about this data? Would you like to have “walking staff meetings” or the ability to change your work station to adapt to both standing and sitting during your work day? Has your company offered the option to have an adaptable work station?