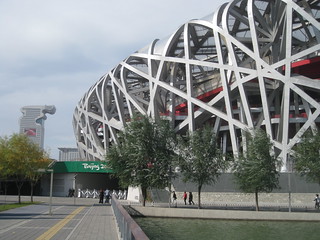 The entire planet will be celebrating for the 2012 London Olympic Games in a few days. The British government should take full advantage of the business opportunities emerged from hosting and present the world an unforgettable Olympic event. There are some concrete lessons London can learn from Beijing’s recent Olympic experience – any my own attending the 2008 games.

Four years ago, China successfully hosted the 2008 Olympic Games in Beijing.  As a Chinese citizen, I still vividly remember the excitement I had while watching one of the games in Bird Nest that summer. Today, there is no doubt that Chinese people are benefiting from the ripple effects caused by the Olympic Games.

After China won the bid to host the 2008 Olympic Games in 2001, our government made every effort to present the world a unique Olympic event. In order to meet the demanding conditions for the games, we literally rebuilt the city of Beijing. The government began the enormous task of creating an infrastructure that could support such a massive sporting event. Building a brand new terminal in the airport, extending subway system, and constructing Olympic Park and other venues have generated tons of business opportunities for various industries.

The Olympics has had a significant influence on Beijing's economic development, environment, and other sectors. The recruitment of Beijing Olympic partners, sponsors, suppliers, and many other companies that wanted to take advantage of this event has helped to boost the city’s overall economic growth. Take tourism for instance, China winning the bid opened huge prospects for foreign investment in the tourist industry. They set up joint ventures, shared profits with their Chinese counterparts as well as played an important part in developing the tourist resources.  In addition, they also participated in the construction of hotels, which not only created thousands of job opportunities but also brought convenience to the society.

Furthermore, to be environmentally responsible, Beijing’s government has observed great improvement in air quality since 2008. In line with requirements of sustainable development, the National Stadium—Bird Nest—is kept for other public usage long after the games. The Olympic Village now is turned into a residential area and becomes an attractive eco-community. The residual benefits of the games are even greater. The successful Olympics has accelerated China's opening to foreign investment, foreign ideas, and internationalization.

Hopefully after this summer, we will have more invaluable experience to share beyond sports. As their slogan said: Inspire a generation. The Olympic Games is not only the legacy for human sports; it is also something special that can inspire people to advance the human society.