One of the fathers of modern American advertising once said, “You are NOT right if in your ad you stand a man on his head JUST to get attention. You ARE right if you have him on his head to show how your product keeps things from falling out of his pockets.” 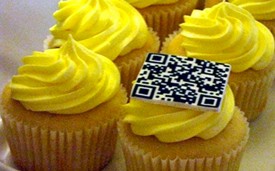 Where will the QR code madness end?

I’m reminded of this quote whenever I see what is inherently a good idea used for no other reason than it is trendy or a cheap trick to get attention. The use of QR codes falls into that category. There is an armed forces recruitment billboard around town with a big QR code on it. I have no doubt that the code links to some potentially important information, but I’m not sure I want anyone trying to scan a billboard with their smartphone while driving by at 50 miles per hour. A more flagrant example of that kind of misplaced marketing occurred in Croatia, where apparently it was proposed that QR codes be placed on automobile license plates that linked to the Croatian tourism website. (“I’m sorry for smashing into the back end of your car, sir, but I was trying to scan your license plate.”)

Other silly uses of QR codes I have seen or heard about include putting one in a TV commercial (like I’m going to have time in 5 seconds to pull out my smartphone and start scanning before the image is gone); codes in airline magazines or subway stations where wireless is typically not available; or in an email or on a website (duh, the viewer is already on the computer, a simple link will do the job just fine).

If you think QR codes are just a fad, you may want to think again. I found all kinds of statistics about the growth of QR code usage. One study found a 617 percent increase in the use of codes in magazines over the last year. Another showed a 4500 percent growth in the actual number of scans in a single quarter last year.

And the demographics are interesting. Women, especially those with families, are twice as likely to scan codes as men. Also, the age demographic shows about equal usage from young adult to older middle age. It is only the 18-24s and those over 55 who don’t seem to be scan fans.

Which brings me to my final point. Those who haven’t embraced QR codes state one of three reasons. One, they are confused about what is expected of them or how to do it. Two, there is lack of uniformity among some of the scanning apps. And, three, they believe the content they are being taken to is irrelevant.

Most people expect some tangible reward for taking the time and effort to scan a code. A discount or other comparable incentive is a very real reward. Just yesterday I scanned a code from Traverse Magazine in northern Michigan offering a chance to win $1,100 in gift certificates from some of the great restaurants up there. But rewards don’t have to be monetary. Convenient functionality is very valuable such as when Home Depot puts QR codes with bedding plants so the customer can learn more about proper planting methods. Games are good, too – but so is providing really valuable information such as may not be easily accessed just by going to the company’s website.

Like so much in marketing, it is a matter of strategy. If the goal is to be gimmicky, most potential customers will grow weary of the irrelevancy. Conversely, if the QR code has an appropriate place in your marketing, then there’s no reason not to go for it.

This post is by Thom Villing, President of Villing & Company marketing communications specialists.