The University of St. Thomas School of Law conferred degrees to 165 students on May 18, 2019. Among them were 129 students earning their J.D. – four of whom earned a joint degree – 19 earning an LL.M. in U.S. law, and 17 earning a master’s or LL.M. degree in organizational ethics and compliance.

Professor Mark Osler, who was elected professor of the year by the Class of 2019, hooded the graduates. St. Thomas President Julie Sullivan conferred the degrees.

“We are grateful for the many ways in which you have helped build this law school, shaped the nature of our community, advanced our mission and shown a degree of ‘personality’ that has been welcome and energizing," he said. "As your Dean, and on behalf of our faculty, staff, Trustees and Board of Governors, I extend our thanks and gratitude.”

As a whole, the J.D. class performed more than 9,600 hours of public service work over the course of their legal education. St. Thomas Law requires each student to perform a minimum of 50 hours of community service on the belief that all lawyers have an obligation to share their skills and knowledge. Eighteen members of the class volunteered more than 100 hours over the course of their law school careers, including one student, Trip Dale, who contributed 638 hours of service to the community.

Six members of the Class of 2019 were recognized with Mission Awards during their time at the law school. They are Dillon Lang, for service and community; Kaitlyn Hennessy and Leslie Redmond, for scholarly engagement and societal reform; and Matthew Hough, Nora Huxtable and Thomas Wheeler, for living the mission.

The Hon. David Stras, U.S. Court of Appeals for the 8th Circuit and former Minnesota Supreme Court justice, gave the keynote address at this year's ceremony. During his remarks, Stras shared several pieces of advice with graduates and his hope that they will continue to learn and challenge themselves after law school.

Stras urged graduates to not be consumed by their careers, to cultivate non-legal interests and relationships, and to seek balance in their lives.

“Yes, practicing law requires time and dedication,” he said. “But the best attorneys, the ones who have long productive careers, leave time for themselves. No matter how busy [they] get.”

Judge Stras also encouraged the graduates to remain “zealous advocates” for others.

“Sometimes the advocacy might come easy—prosecuting a white-collar criminal, protecting the interests of children or helping an entrepreneur start their first business. Other times it'll be an uphill battle,” Stras said. “But advocating for what you believe is always the right thing to do. Why? Because to maintain your integrity, you need to speak up. Be a voice within your community, not just a member of it. Do not be afraid to be the lone dissenter. Goodness knows I often am. And when you have the opportunity to do something exceptional, that's your cue to write your script and go for it.” 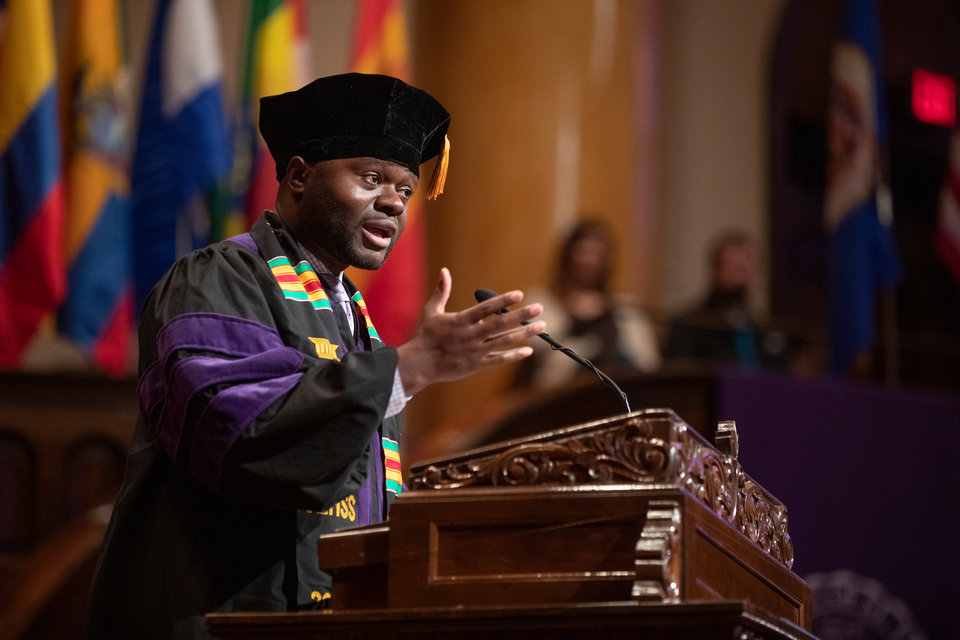 Student speaker Abou Amara, Jr., speaks to his classmates during the 2019 School of Law Commencement Ceremony at Westminster Presbyterian Church in Minneapolis.

Vischer was referring to Amara’s work prior to and during law school in local advocacy groups and in state government. In 2014, Amara was named a Next-Gen Leader by Twin Cities Business on their annual list of 100 People to Know. He currently sits on the board of directors of two area non-profit organizations focused on alleviating poverty and expanding economic opportunity in the Twin Cities. Amara’s post-graduation plans include work with a New York City-based organization focused on voting-rights advocacy.

In his remarks, Amara reflected on his law school experience and spoke about his classmate’s hard work and support of each other.

Amara ended his speech by saying to his fellow graduates, “I ask you for two things. First, I ask you to pursue your purpose. Be a part of something bigger than yourself and be part of advancing justice. And the second thing I asked you is to understand people who are diametrically different than you—race, class, sexual orientation. The only way we can advance the common good is when we see ourselves in other people.”