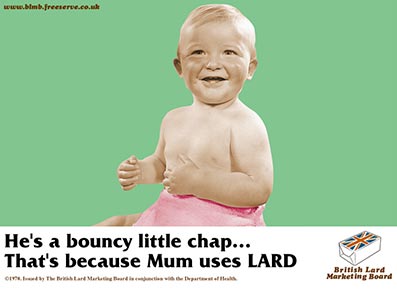 Just how powerful is branding?  National Public Radio recently posted an interesting segment in regards to lard of all things and its lack of popularity due in large part to branding.  You can find this podcast as part of their Planet Money feature:

On today's podcast, we ask — who killed lard? Was it Upton Sinclair? His novel, The Jungle, contained [a] memorable passage about the men who cook lard. Or should we blame William Procter and James Gamble? It was their company which created a new alternative to lard — the "pure and wholesome" Crisco.

One of my colleagues brought the podcast to my attention, being the avid baker that I am.  I can’t say I’ve ever used lard in any of my baking but I do know bakers that are strong advocates of the stuff.  I’ve gone head to head in pie competitions between friends and lose every time!  The winner proudly touts it’s the lard he’s committed to using that creates the best piecrust.

Natural lard is actually healthier than hydrogenated fats such as Crisco and butter.  As a whole, it is lower in saturated fat.  There's been a good deal of back and forth on the matter of what fats are bad or good for you, but the main confusion has been over trans fats—vegetable fats that have been artificially hydrogenated.  Unlike naturally saturated fats such as lard, vegetable oils are not hard at room temperature and in order to make them hard, and thus make them more resemble traditional animal fats like butter, they have been hydrogenated (or converted into "trans fats”). 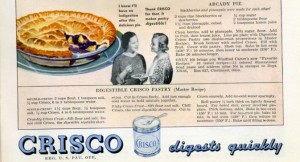 For a long time this was not recognized as being problematic in regards to their healthfulness.  A shift occurred in the 1930s where Crisco was deemed “natural” and “easily digestible.”   The controversy continues to this day with many turning their noses up at lard, still having the mindset that vegetable based is better than animal based.  Proctor and Gamble live by their Crisco ads!  Lard has received a bad rap though much can be said today for getting away from hydrogenated fats as found in Crisco.

I may try using lard in my next pie baking adventure.  It would be interesting to involve my colleagues in a blind taste test whereby two pies were made—one with lard and the other with butter.  I’d venture to say they would be ready for the challenge.  Perhaps lard shouldn’t be disregarded as much as it is.  It is interesting to see that specific marketing some seventy years ago forever-tainted this fat!