Forbes' Abram Brown recently posted an article on America's shrinking workforce that relates closely to a recent UST Master's Pub featuring Tom Gillaspy, Minnesota's state demographer. Below are excerpts from Brown's article, with some supporting notes relating to trends in Minnesota. How do you feel about the changing labor force? Let us know in the comments.

To hear most economists tell it, the prolonged recession has caused millions of Americans to leave the labor force.

Perhaps though there’s another story there. Maybe it’s just the baby boomers.

Baby boomers, the generation born between 1946 and 1964, started reaching the conventional retirement age, 65, last year. That would certainly have many of them leaving their jobs and heading toward the doors. It’s their exit from the labor force that could explain why the labor-force participation rate has fallen from 66% at the end of 2007 to near 63.9% today, a group of Barclays Capital economists argue in a new report.

Gillaspy made a similar point: we are in a new demographic era with more retirements and an aging workforce. Furthermore, he notes there are fewer new entrants into the job force. This means economic growth will require more productivity. His talk included his definition of "the new normal" and I've included that below: 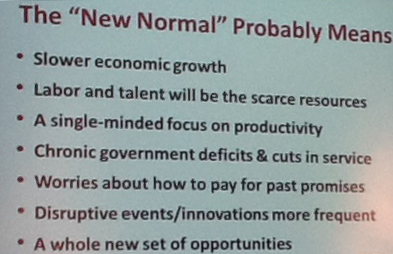 From Forbes: According to the [Barclays] report, just a third of the drop in labor force participation came from those who still wanted a job—and only 15% of those folks are of prime working age, 25 to 54. So, the economists see “the possibility of a large and sudden return of previously discouraged job seekers to the labor force as remote.”

This would be good for the bearish holdouts on the economic recovery.

"Workforce growth is going to be the slowest on record for the first time," predicts Gillaspy. We're going to have more "replacement openings" than "new openings" for jobs. This means opportunities for young people will increase--but students need to be adequately trained. Everything from high school math to M.B.A.s will take on increased importance in the changing labor force.