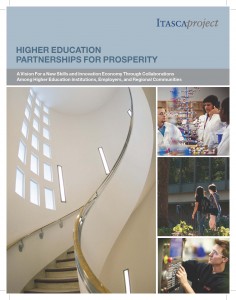 According to a report released by The Itasca Project, Minnesota’s higher education institutions act separately from one another and sometimes view each other as competitors rather than collaborators. Meanwhile, businesses see post-secondary institutions as sources that fuel their work force but only infrequently interact with them.

Christa Meland at Twin Cities Business detailed how the state’s colleges and universities need to find new ways to collaborate with each other and local businesses in order to fuel economic growth and prosperity in Minnesota.

The report pointed out that Minnesota has more than 200 post-secondary institutions that collectively serve nearly 500,000 students annually and maintain annual budgets that together total about $7 billion—and it touted the fact that Minnesota ranks eighth among states in terms of the share of high school graduates who enroll in higher-education programs.

Minnesota jobs requiring post-secondary education are estimated to grow by nearly 8 percent between 2008 and 2018, while jobs that require no more than a high school diploma will increase by only 3 percent over the same period, according to the report, which cited a Georgetown University study. By 2018, 70 percent of Minnesota jobs will require post-secondary education.

Opus Magnum discussed the changing demographics in the state that relate to this topic in a recent post.

To read more visit Twin Cities Business or go straight to the group’s full report, and to learn more about the strategies it’s proposing.