When the incoming class of Dougherty Family College students arrived Aug. 22 on the Minneapolis campus of the University of St. Thomas for the Summer Enrichment Program, they were greeted by DFC Dean Buffy Smith. Although Smith has been with the college since its founding in 2017, this is the start of her first year since being named dean in May. Her previous roles were as interim dean and associate dean of academics.

“We are proud of you and so happy to have you join our family here at Dougherty Family College,” she told the first-year scholars attending the two-week orientation at the college. This year, the 130 new enrollees helped bring the DFC student body to a total of 170 scholars.

“This is our largest enrollment since the pandemic,” said Smith, beaming. “It is a big victory for our DFC team!”

While rejoicing is in the air, the work continues. In the upcoming four years, Smith hopes to accomplish five objectives, one of which is to enroll at least 160 first-year students annually. The college plans to increase its outreach to area high schools and build community partnerships with organizations like Northside STEM, Jeremiah Program, and Pillsbury United Communities.

Another DFC strategic objective, she said, is for the two-year college to raise $12 million for scholarships and launch an Associate of Science degree program to better prepare DFC students for STEM majors and careers. Currently, graduating scholars receive an Associate of Arts degree.

“Our 17-member advisory board is engaged with helping the college achieve its strategic goals and they provide guidance and support to me in leading the college,” Smith added.

Another goal in the strategic plan is to increase community awareness and engagement within the university and throughout the Twin Cities community. Smith said that when it comes to St. Thomas, she will keep advocating for meaningful interaction between the Minneapolis and St. Paul campuses. She thinks that if more faculty, staff and students on the St. Paul campus planned some of their meetings, universitywide lecture series, student event groups, and social gatherings on the Minneapolis campus, it would help all Tommies unite and foster a more inclusive institution.

Across the metro area, she said that word of mouth, integrated marketing strategies, and community and corporate partnerships are some of the avenues that bring awareness to the college. For example, Twin Cities radio talk show host Sheletta Brundidge interviewed Smith on her program, and she also collaborated with the college to produce video segments for social media that showcase the values and the goals of the program.

“Dougherty Family College is an amazing opportunity right in our backyard,” said Brundidge, who also indicated that she’d be interested in her teen son attending DFC once he finishes high school. She’s attracted, in part, by the family atmosphere and how “at Dougherty Family College, they know your name. They’ll check to make sure you’re OK.”

U.S. Bank, one of the first companies to sign on as a corporate sponsor prior to the college’s launch, recently announced its renewed five-year sponsorship.

“The program works,” said Greg Cunningham, U.S. Bank’s chief diversity officer and senior executive vice president. “When you can give students equal access to opportunity, and also surround them with the necessary tools and support programs, it works.”

One of DFC’s partners, the Constellation Fund, conducted a cost/benefit analysis on Dougherty Family College and determined that DFC is a wise investment for reducing poverty in Minnesota. Researchers and economists at the Constellation Fund found that DFC's wraparound student support services generate $4.81 in benefits for every dollar invested.

“Indeed, investing in our DFC scholars will have short-term and long-term benefits for our state and nation,” Smith said. “DFC graduates will become transformative leaders in our community. Our individual donors and corporate partners are committed to changing the lives of our scholars, their families, and the communities they represent.”

Grateful for the renewed support of U.S. Bank, 3M and the college’s newest corporate sponsor, Castlelake, Smith adds that corporate and community partnerships are integral to the school’s success and that she will continue to collaborate with others to help build a sustainable network to bring her goals for DFC to fruition. She received an early taste during her role as interim dean.

“I had more opportunities to engage with advisory board members, trustees, community and corporate partners, and donors and I truly enjoyed these meaningful connections,” she said. “As a result of these external relationships, I was able to help secure scholarship funds and other resources for our scholars, staff, and faculty, which was something I was unable to do as a teacher or associate dean,” said Smith.

Smith knows the programs they set forth at Dougherty Family College are working because she sees the success in the results.

Currently, as a college, “we have very impressive educational outcomes,” Smith said. “Our average two-year graduation rate is 56% (almost twice the three-year graduation rate of Minnesota community colleges, 31%), and 75% of all DFC alumni who matriculate are enrolled in a four-year program.”

Still, over the next four years, Smith seeks to increase DFC's average two-year graduation rate to 65%, which would be more than twice the average three-year graduation rate at community colleges nationwide and in the state. Since 2021, Dougherty Family College has graduated 30 scholars with their bachelor's degrees.

Smith understands what it takes for underrepresented students to obtain degrees in higher education. She grew up in the inner city of Milwaukee where she and her family lived in public housing. When she was in elementary school, she experienced discrimination based on her race and socioeconomic status. Despite the prejudice and discrimination, she found a love for learning. Pursuing her education sparked her interest in teaching and in the education system.

She studied at Marquette University and the University of Wisconsin-Madison. She chose sociology as her major and said that it gave her the theoretical knowledge and analytical abilities to address social problems.

“I am a creative problem-solver who fundamentally believes there is a solution to every human-made social problem,” Smith said. “As a society, we created structural barriers and inequities in education, and it is our collective responsibility to remove the barriers. I am ready and prepared to do my part.”

She added “my lived experiences and research passion has influenced my life’s mission to eliminate inequities in higher education.”

At DFC, her mission is being realized.

More than 90% of Dougherty Family College scholars hail from ethnically diverse backgrounds, as does approximately 50% of the faculty and staff.

"At Dougherty Family College, we work together as a team,” Smith said. “We are a strong and united team with a laser focus on our shared mission to educate, develop, and empower scholars to become transformational leaders. I consult with and seek support from faculty, staff, and scholars on how we can achieve our goals.”

“In four years, I hope more people in the Twin Cities know who we are, whom we serve, and how we serve them,” Smith said. “I want Dougherty Family College to be known as a premier college that provides an academically rigorous, culturally affirming, and supportive learning community for underserved BIPOC and first-generation college students,” Smith said. 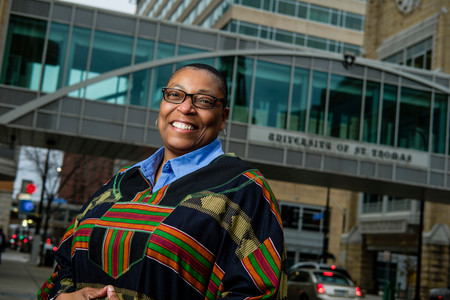